Disease lead to a dream job

Lorenz Matter was born in 1969 and grew up in Wohlen in the Canton of Aargau.
With 12 he had to stop doing sports because of a growth disturbance. To go easy on his knee, he was only allowed to do cycling. As a consolation gift his parents offered him a unicycle, which had him recognize his talent in balancing – it took him half an hour to figure out how to ride the unicycle, then he started to practise every day. The door to the world of artistry had been opened and soon he added the study of acrobatics and handstands at the Ilg school in Zurich.
His unstable shoulders couldn’t stop his path to acrobatics, either (he had a carrying dispensation for weight exceeding 5kg during military service). They even turned out to be an advantage in learning the one-armed handstand, as he could only stabilize the shoulder when he was in the perfect position, thus learning the right technique for sure.
After graduating from College in Wohlen (AG), he studied 2 semesters of Physics at the Swiss Federal Institute of Technology ETH in Zurich. But the passion for artistry was greater and he interrupted his studies and moved to Paris with Cornelia to attend the Ecole Nationale du Cirque Fratellini. Story to be continued under Duo 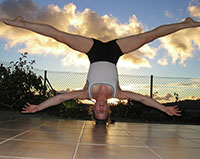 Cornelia Clivio was born in Zurich in 1963. After graduating from College she would have liked to learn a stage profession, but her parents disapproved a formation that would lead to an unprofitable life. So she went for Romance studies and became a College teacher to achieve financial independence and fulfil her dream. During her studies she participated in various open theatre groups. After getting her degree she started studies at the Comart.
Her need to pursue further education in acrobatics led her to Paris in 1990. There she learned all circus skills at the Ecole de Cirque Fratellini and studied stagecraft with theatre guru Philippe Gaulier. When she ran out of money, she came back to Switzerland.
Despite the late diagnosis of epilepsy and the treatment thereof, she remained unstoppable on her way to become an acrobat. Working with Lorenz, she omitted all rapid movements and together they found a calm and fluid acrobatic performance – the adagio number “Living Sculptures”.

Cornelia and Lorenz met in Rome at a circus course in 1990. They interrupted their former lives as a college teacher and physics student and moved to Paris to attend the Ecole Nationale du Cirque Fratellini and theatre classes with Philippe Gaulier (Cornelia).
When they ran out of money, they moved back to Switzerland and went on with autodidactic formation through five hours of practice each day and various stays abroad (e.g. 3 months at the circus school Châlons-sur-Marne).
In 1992 they started to teach acrobatics in the academic sports club of the ETH/University of Zurich they’re employed in the Manege weekly to date.
At the very beginning of their career as Duo Scacciapensieri the acrobatics number was awarded with the 1993 “Kleiner Prix Walo”; this encouraged them in continuing despite the difficult circumstances. In 1994 their unicycling number won them the the Special Price at the Unicycling World Championships in Minneapolis (USA). This marked the beginning of bookings for all vaudeville stages, festivals and TV shows home and abroad (Europe, USA, Canada, Japan, Arab. Emirates).
In 1999 they were able to move into the Loft in Dietlikon, where living and practicing became possible all at the same place. The practice room allowed the elaboration and production of big stage shows. In 2001 the evening-filling stage program Stage TV was created together with Romano Carrara and Daniela Lager. It has been performed over 500 times all over Europe and was awarded numerous prizes.
The birth of daughter Irina in 2005 contributed to the creation of children’s courses in the Loft.
In 2007 they developed and produced the next evening program: coloro. The first parts of the show were only just created as they were invited to “Le plus grand cabaret du monde” in Paris (France2), to the “CreaTVty award” as well as “Benissimo” on SFDRS and to the “Rose d’or” in the KKL in Lucerne to name but a few. It became ever more difficult to find the balance between family and job.
In 2008 came the big break. Coloro was getting ready for the great tour through Japan and Europe, as Lorenz constantly lost strength. The doctors diagnosed Lorenz with lymphoma in the last stage. To make bad things even worse, an aortic aneurysm was discovered close to the heart. After the successfully terminated chemotherapy came a short period of recovery, before the upcoming difficult heart operation; fortunately everything went well here, too, and Lorenz made it back to stage (report Aeschbacher/ Kulturplatz). In autumn 2010, 2 years late, coloro could finally perform its Swiss premiere at the Casinotheater Winterthur: it was celebrated by the audience with a standing ovation (report 10vor10). 2010 coloro won the award “artist of the year” in Germany in the category “innovative show”.
But the illness had left its mark and raised (vital) questions. Stage success became secondary and other values became more significant. Thus Cornelia and Lorenz learned to be yoga teachers in 2012-2013 with Marcel Stöckli (Living Buddha) and Lorenz studied thai yoga massage and Dorn therapy.
In 2013/(2014) silk/aerial yoga studies at Yogamar – Philipp Henn.
In 2015 Cornelia and Lorenz were amongst the 2000 candidates of the show DGST (“die grössten Schweizer Talente”, the greatest Swiss talents) with coloro and reached the final show. 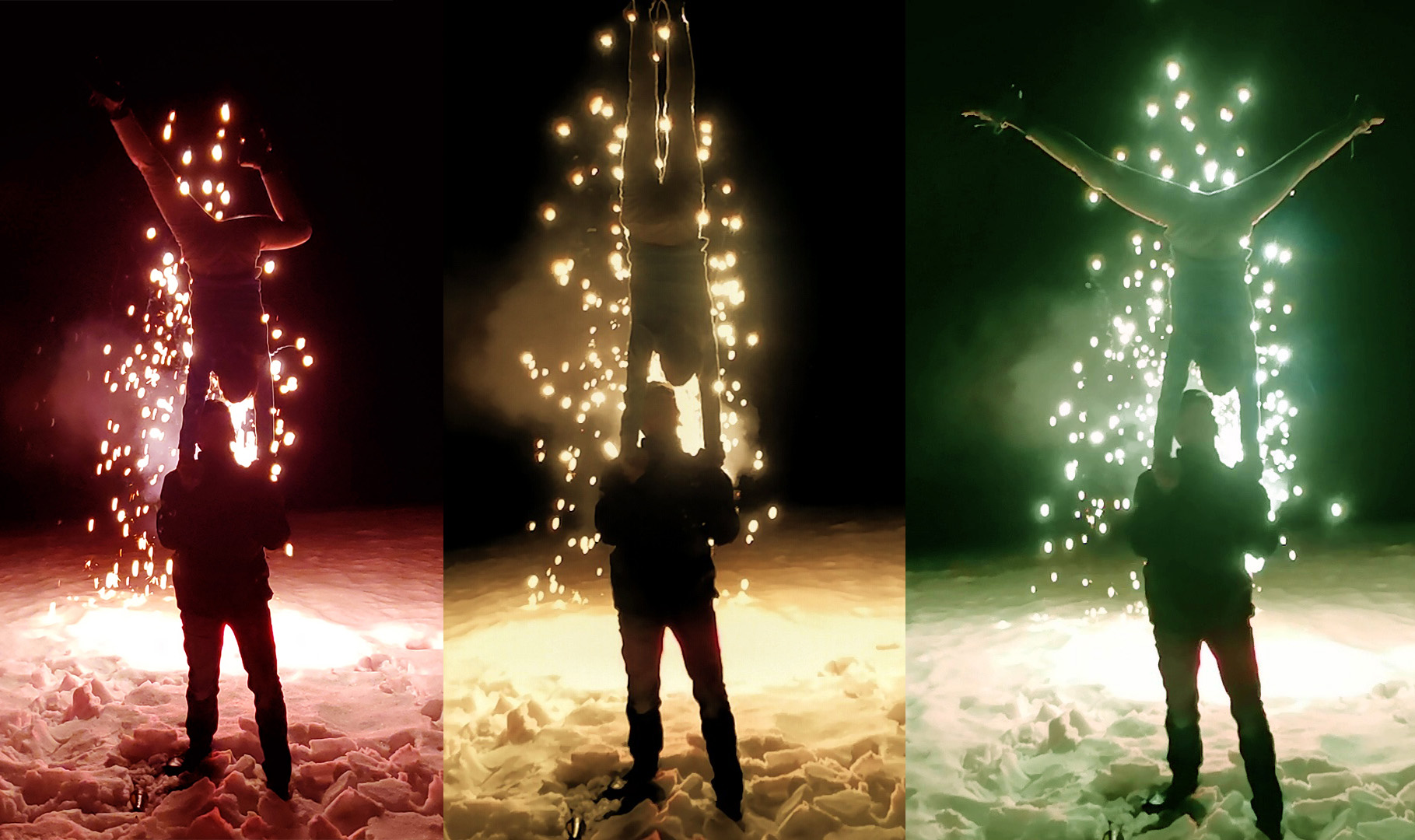 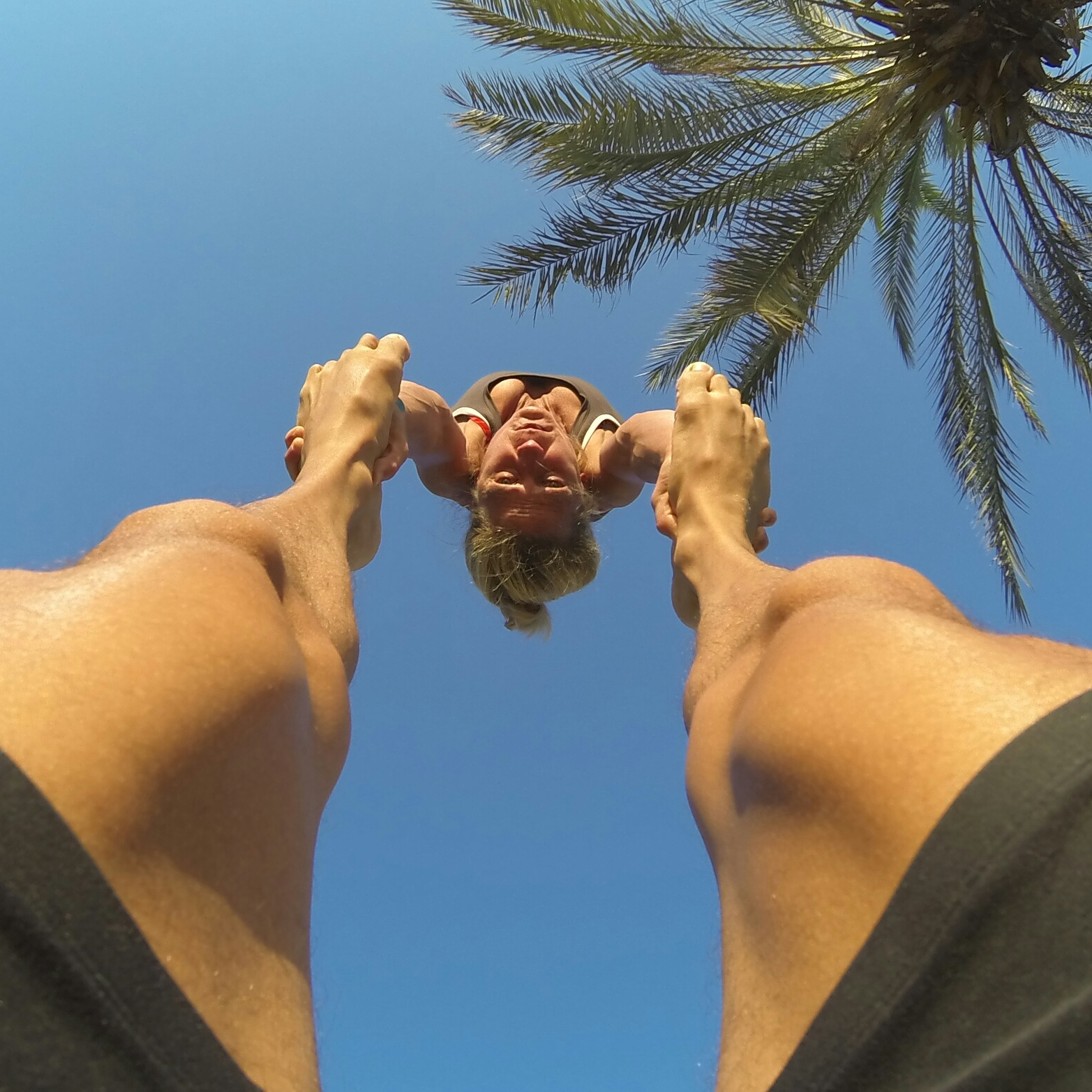 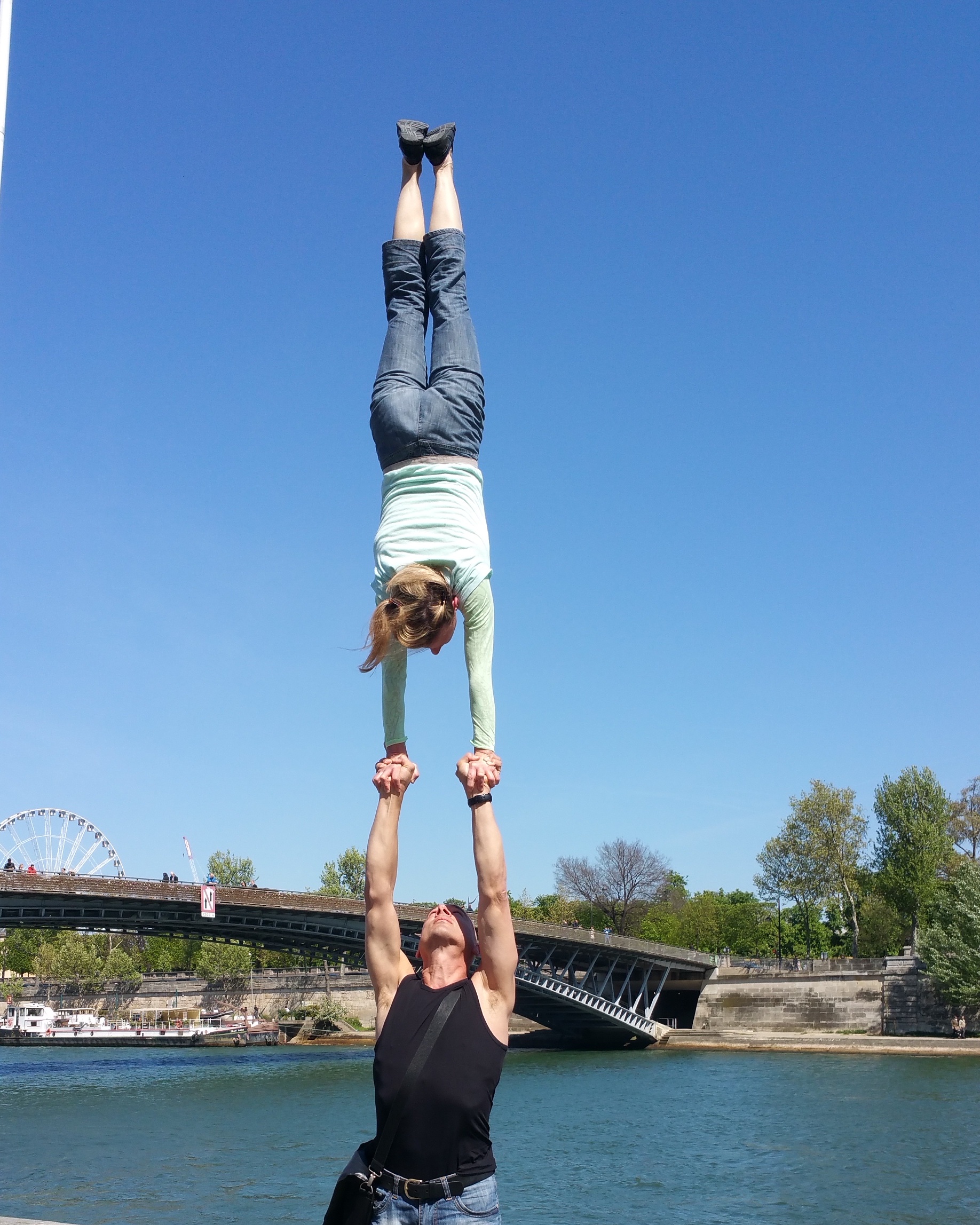 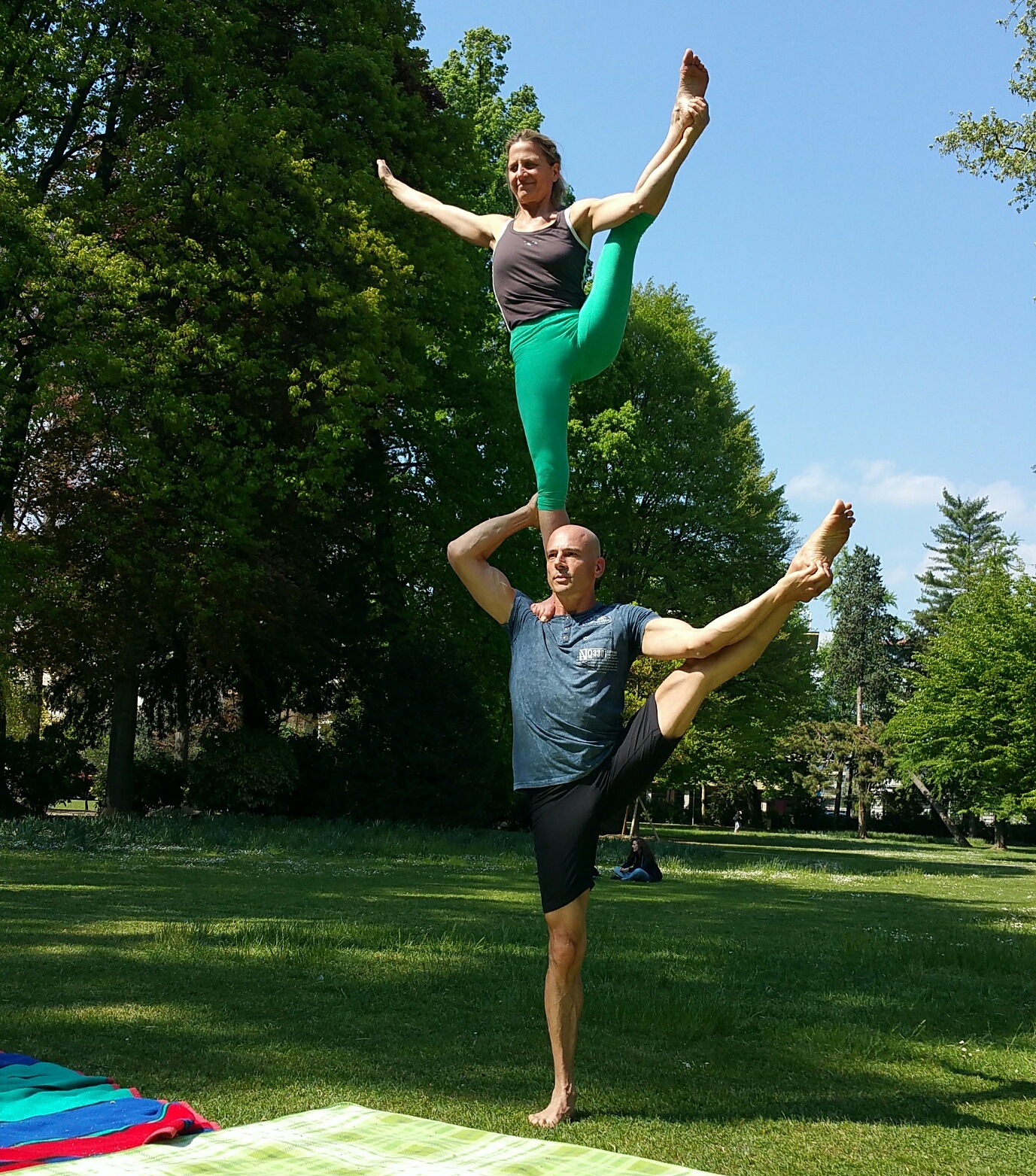 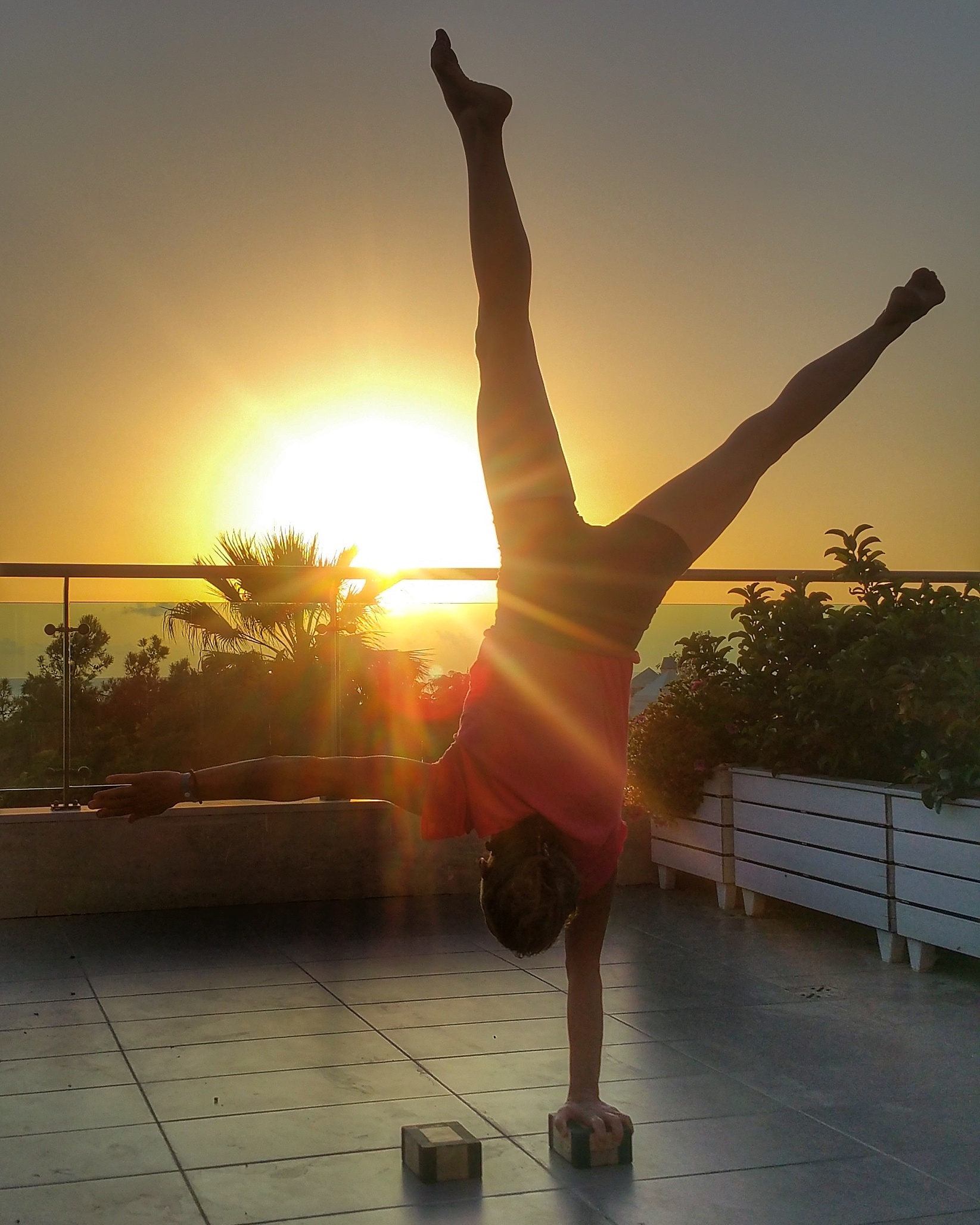 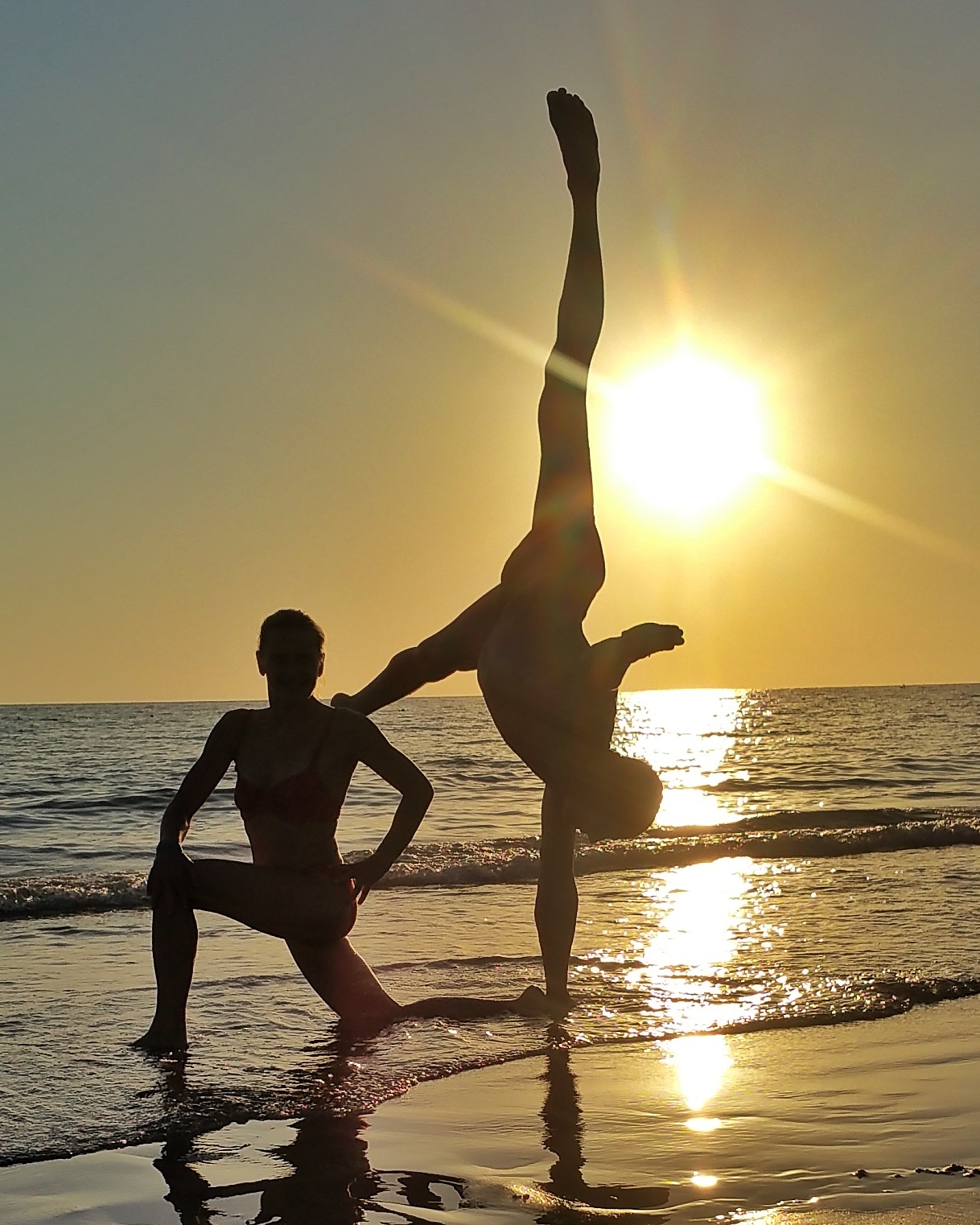 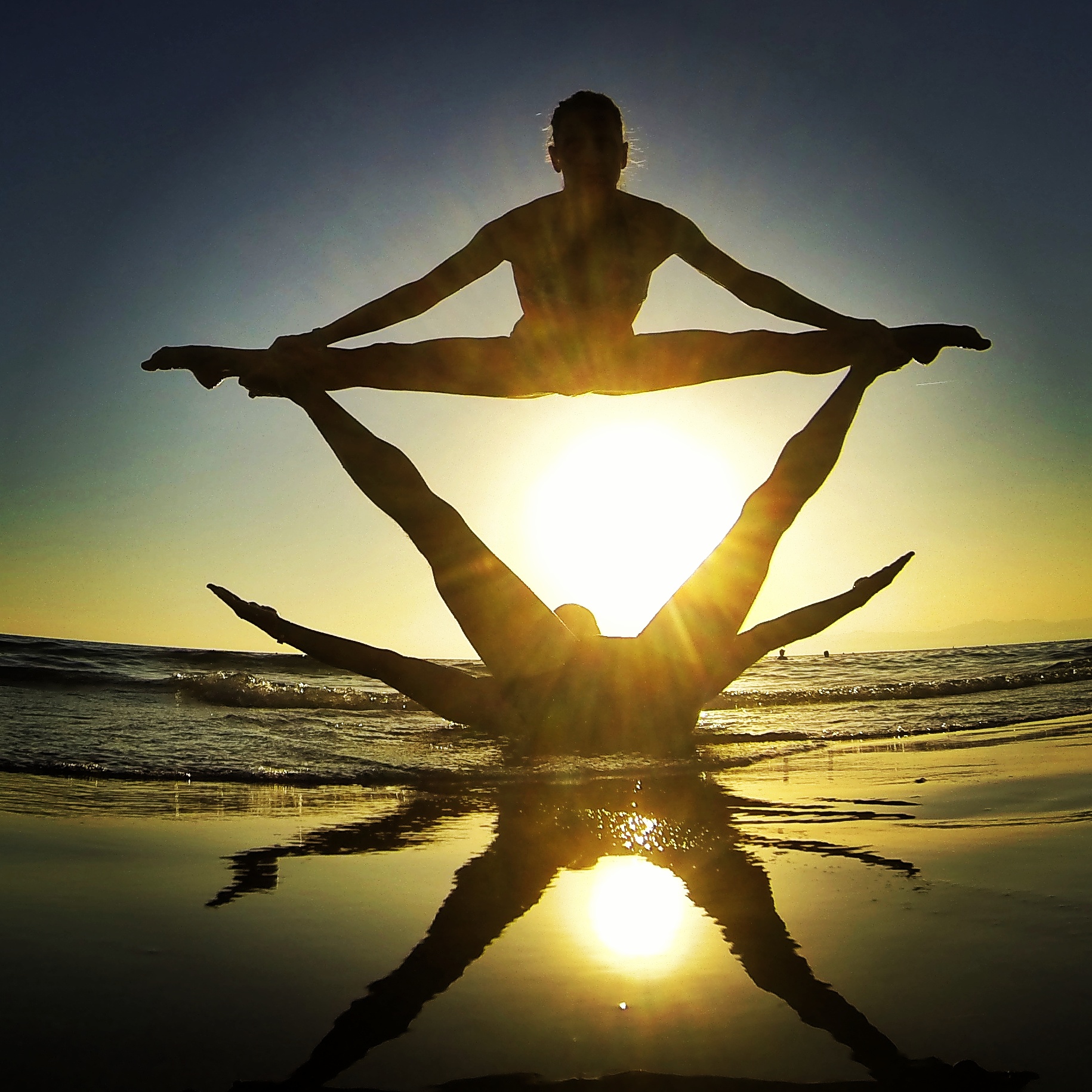 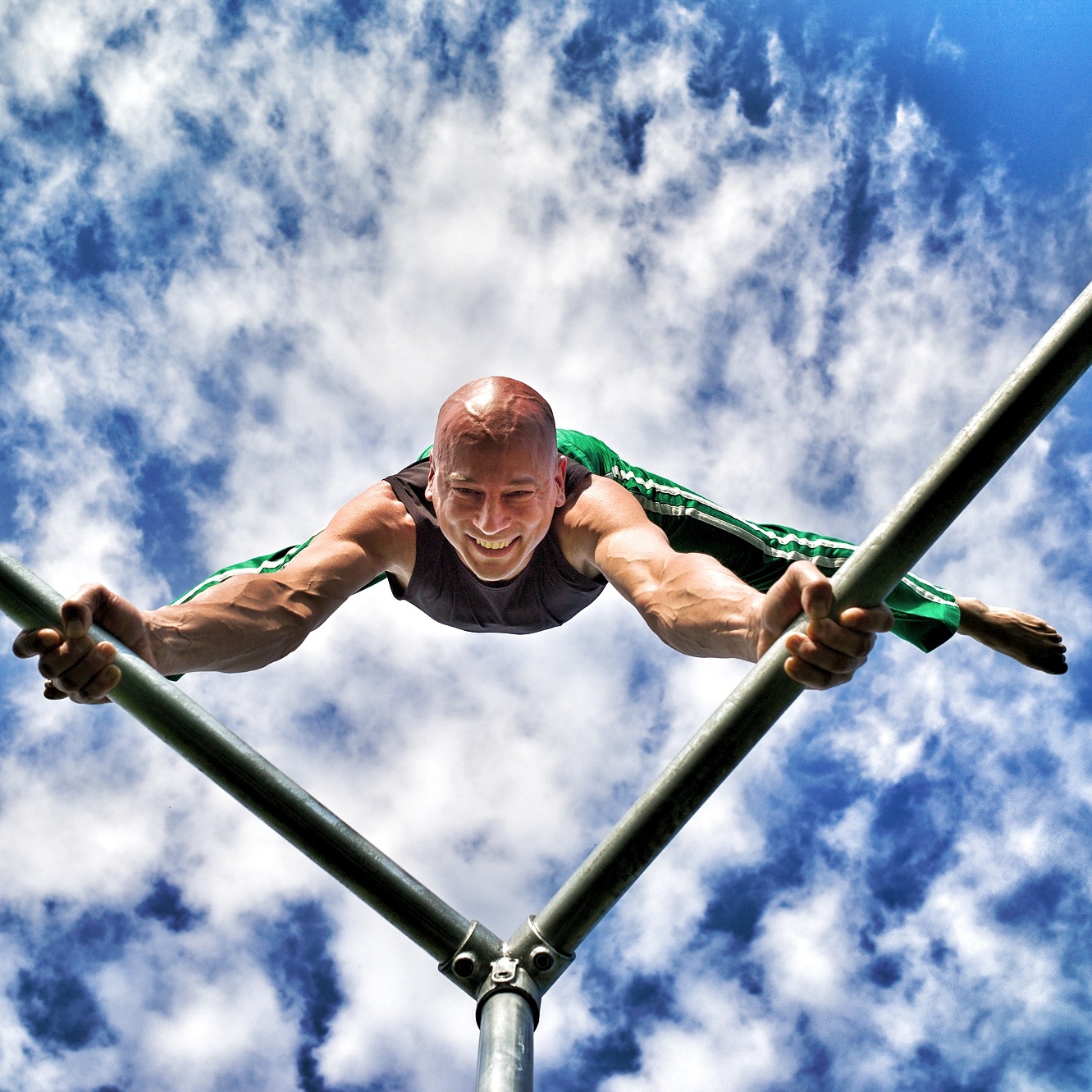 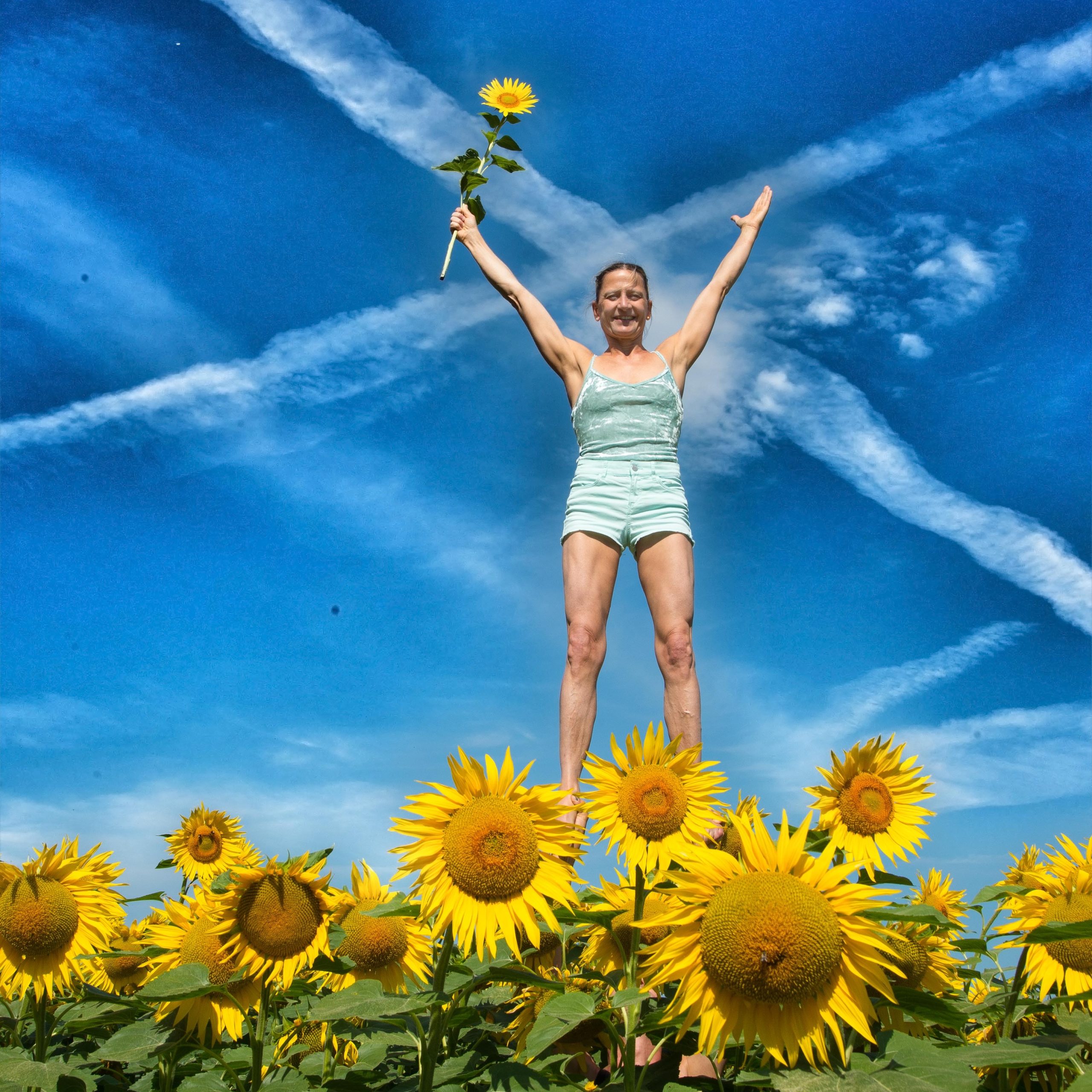 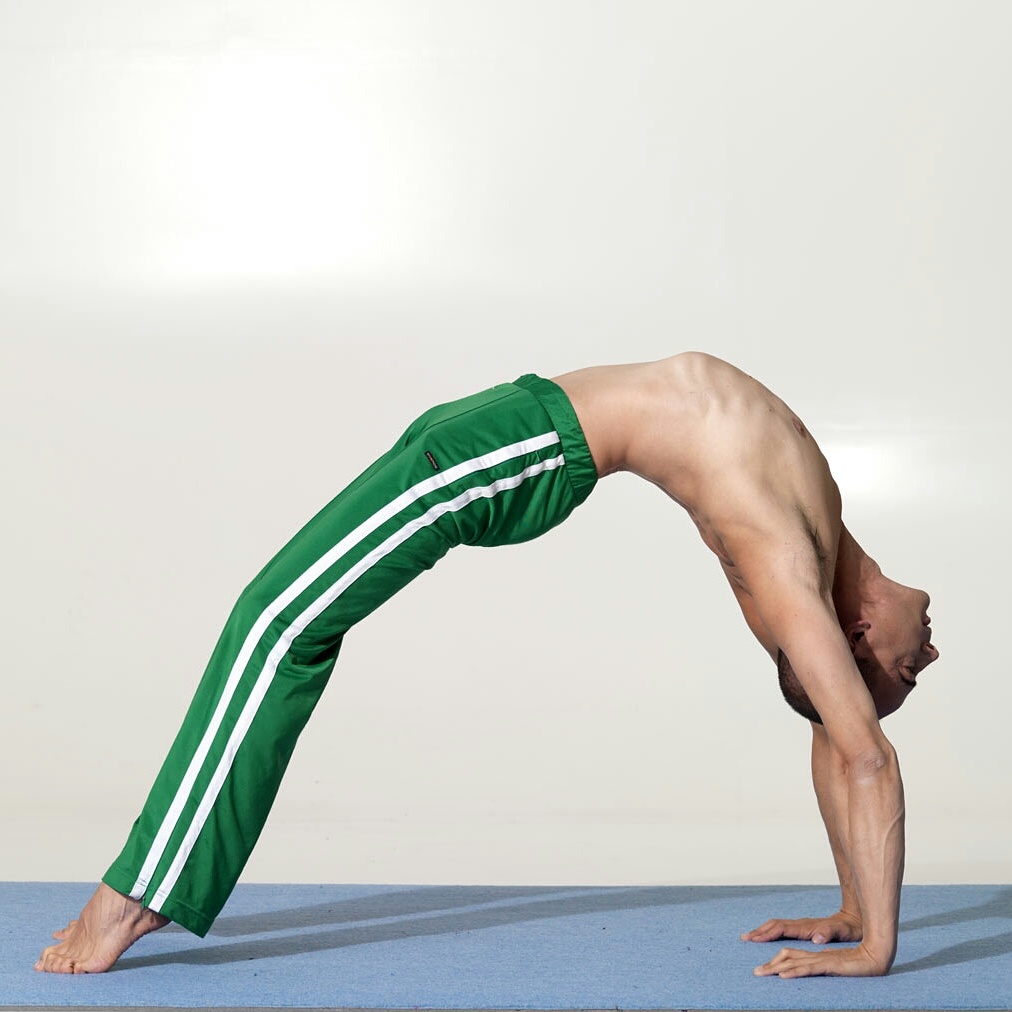 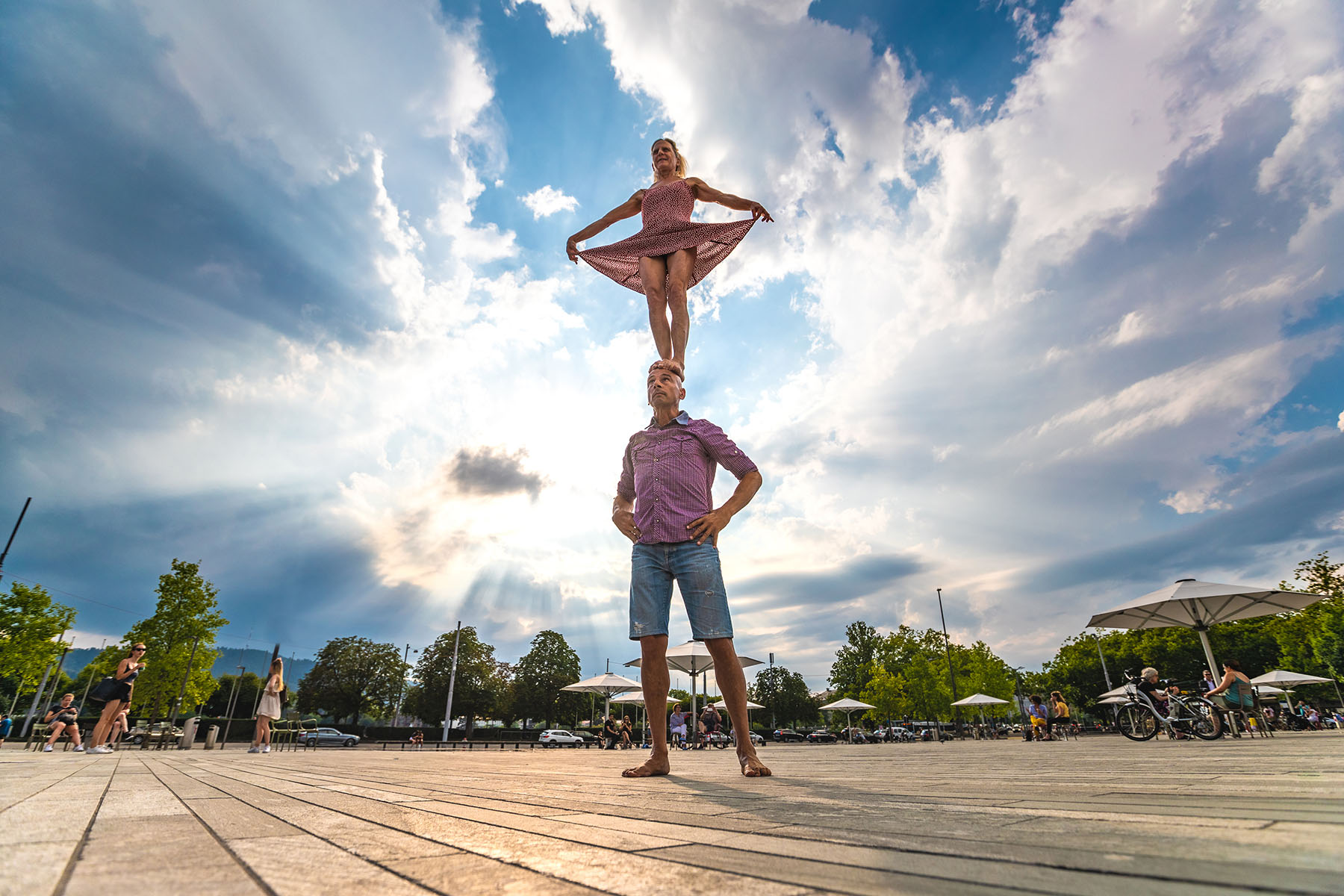 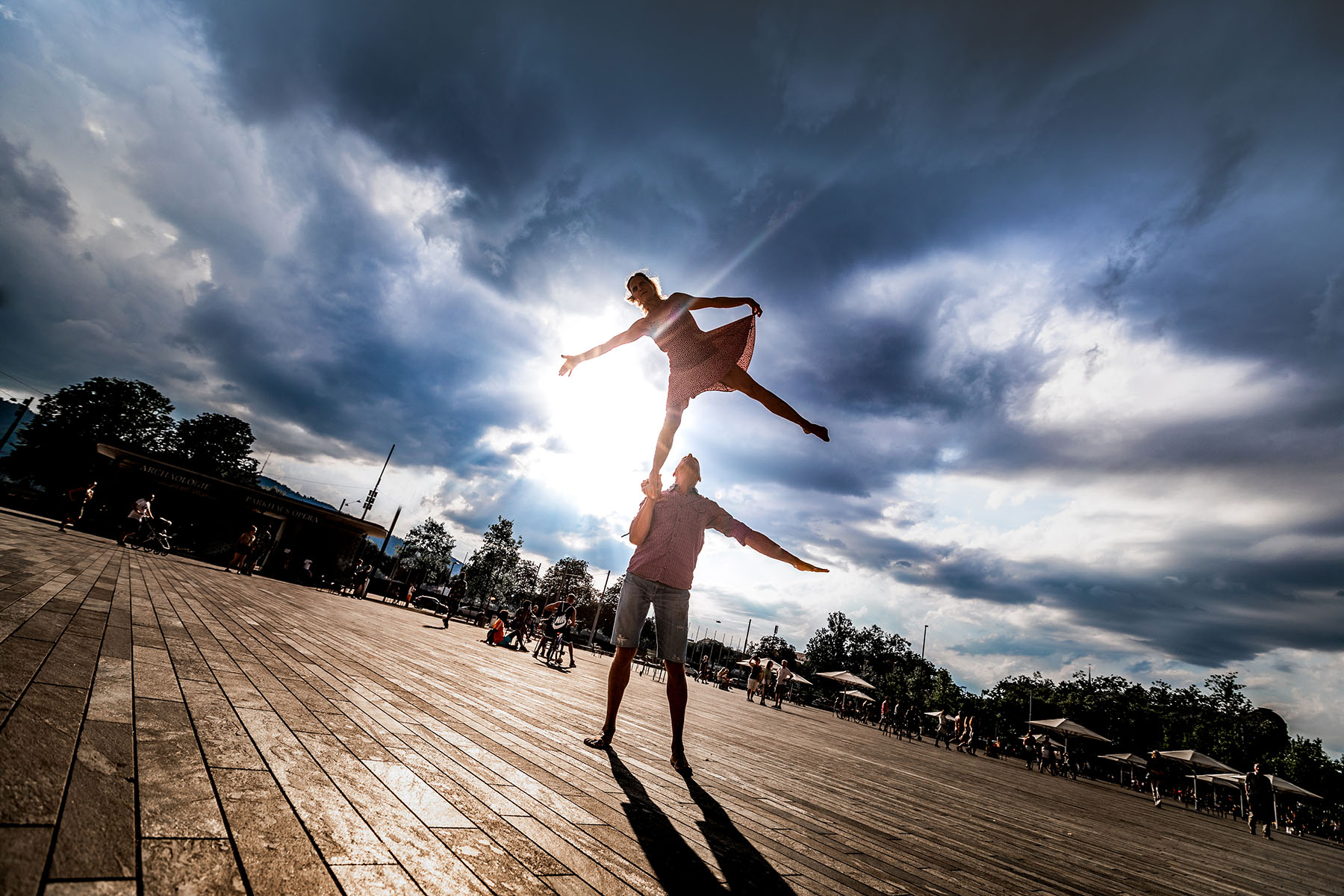 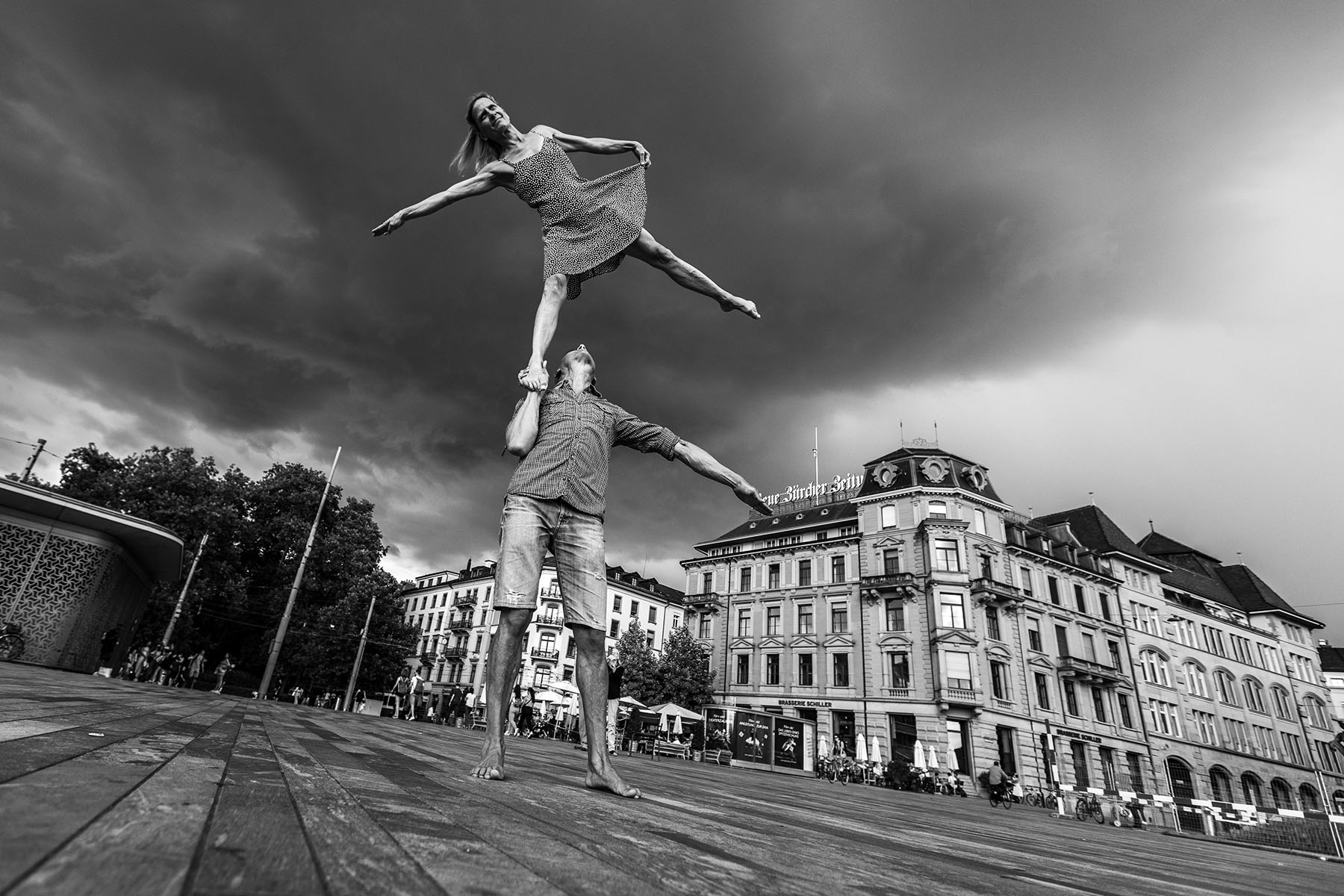 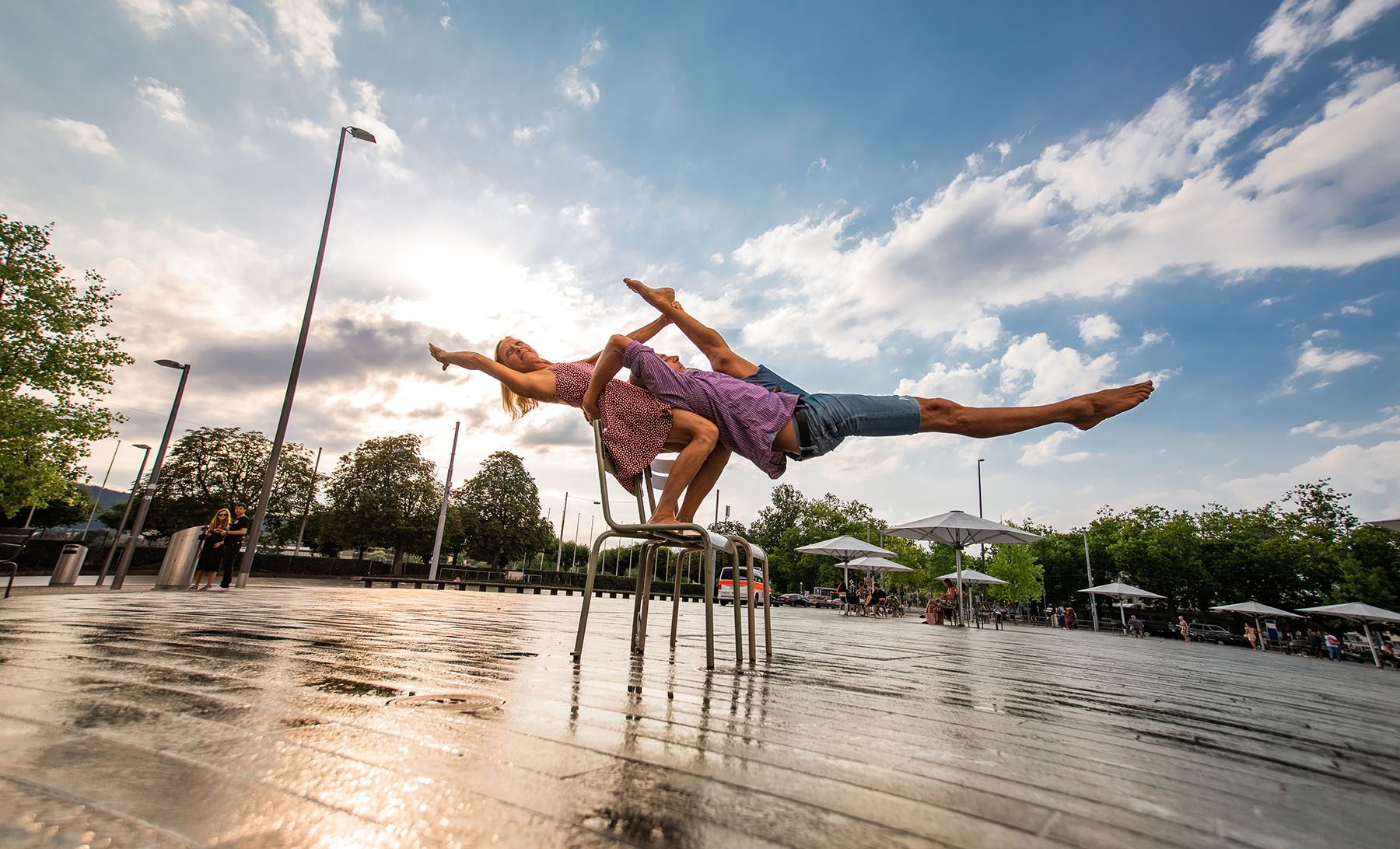 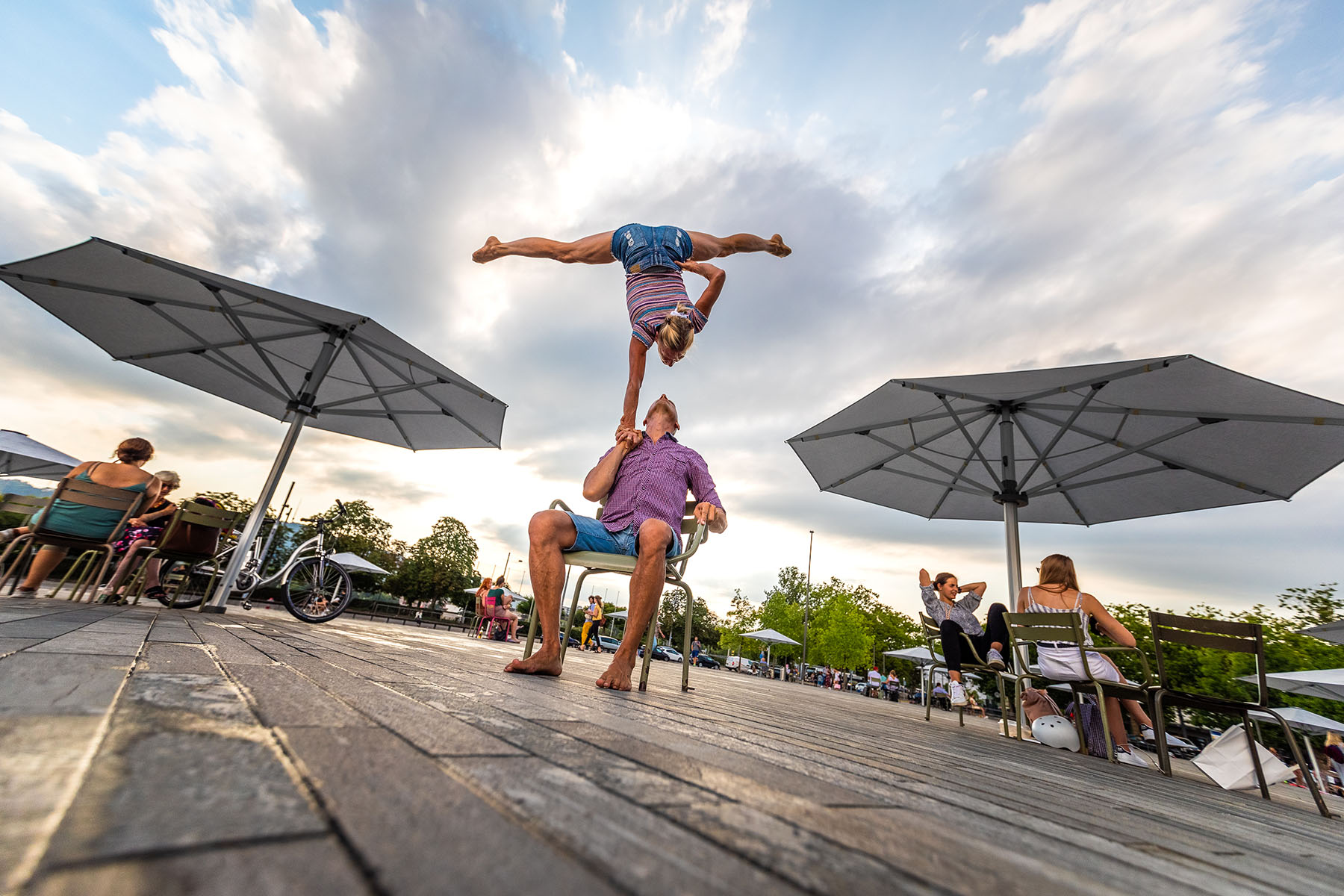 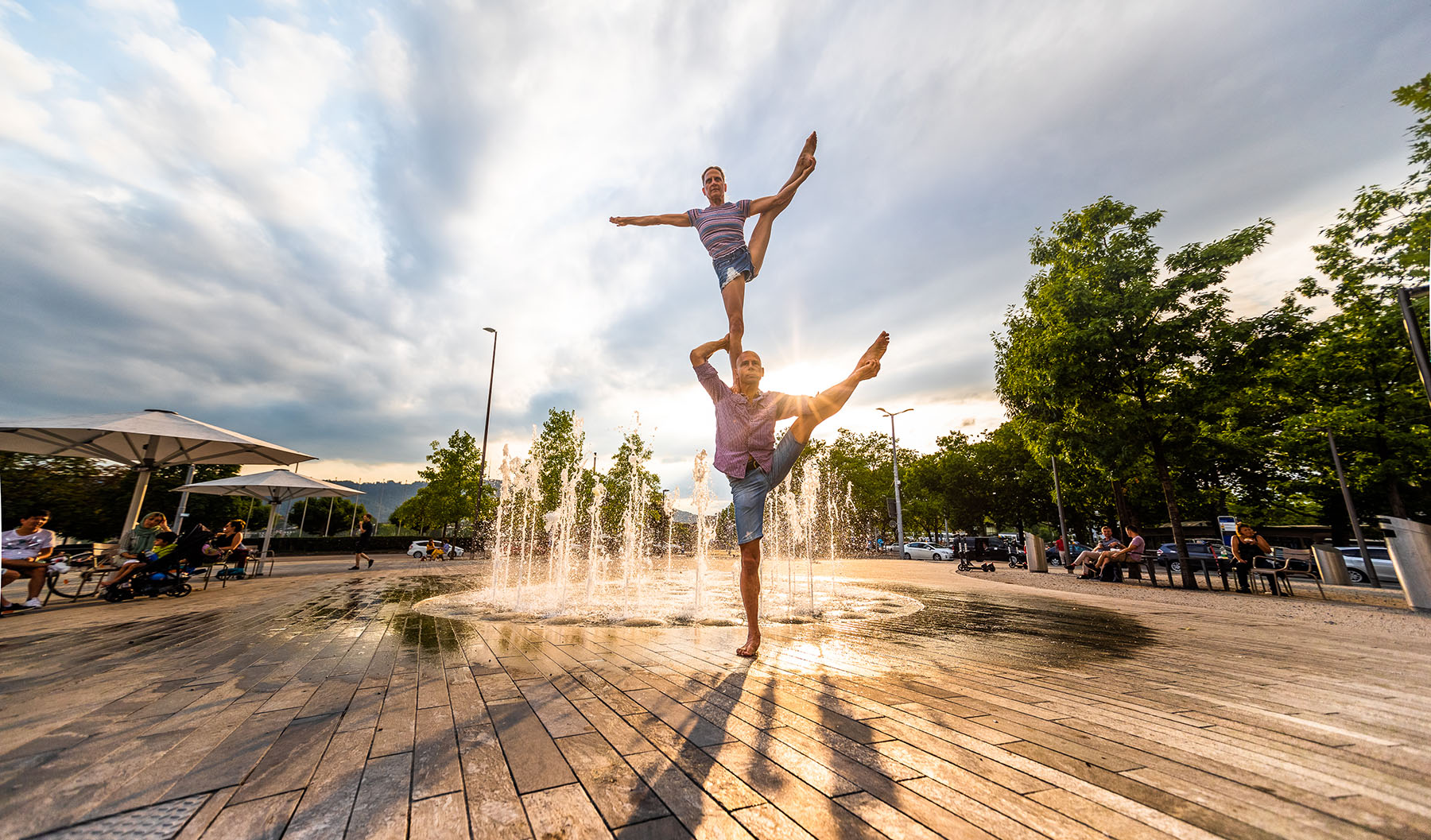 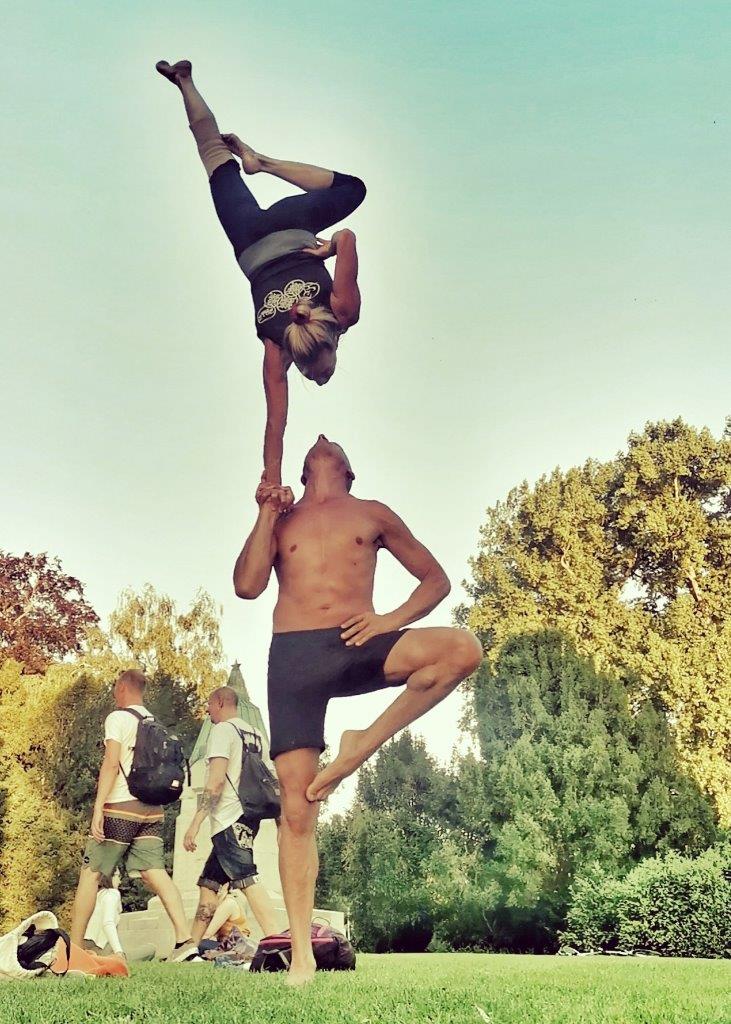 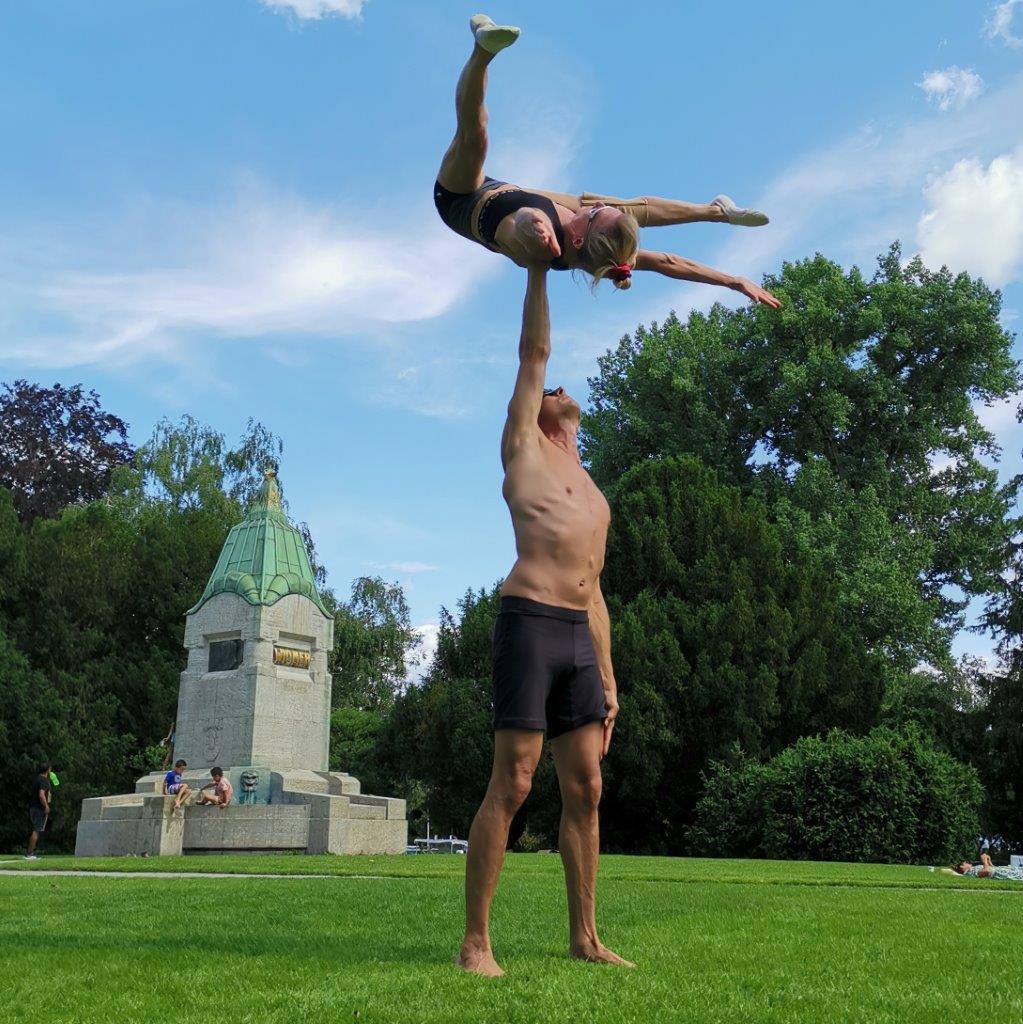 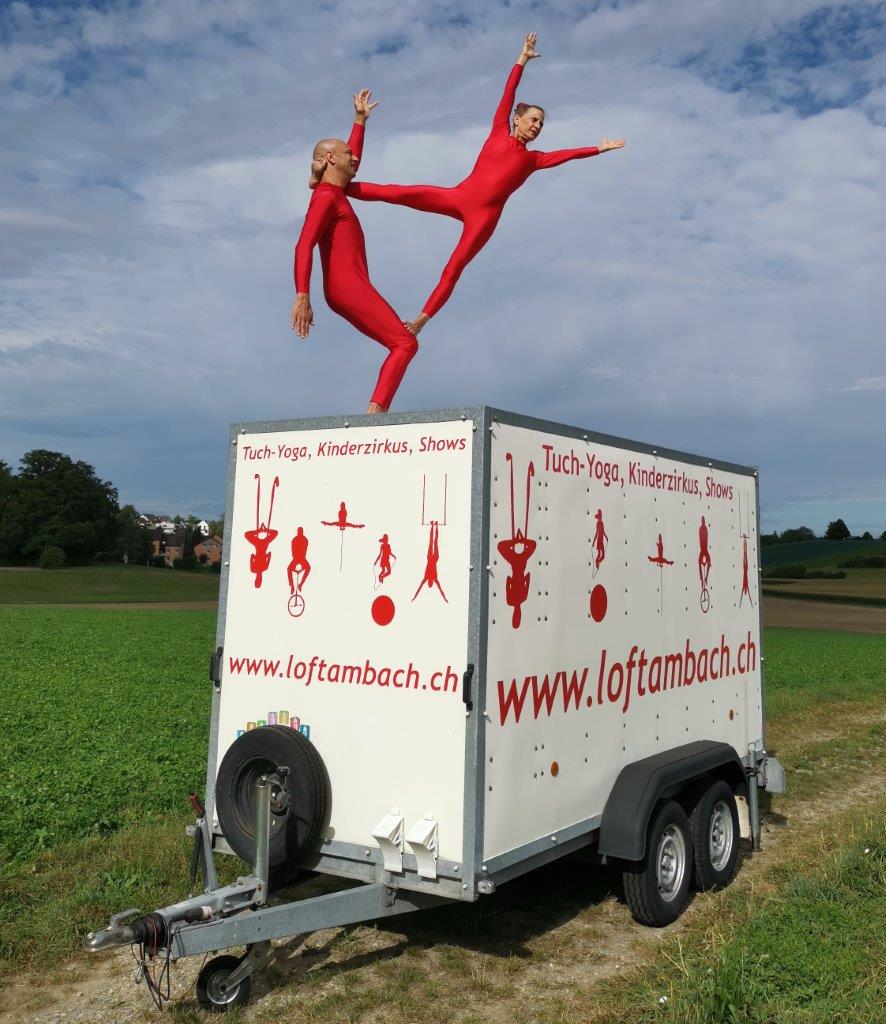 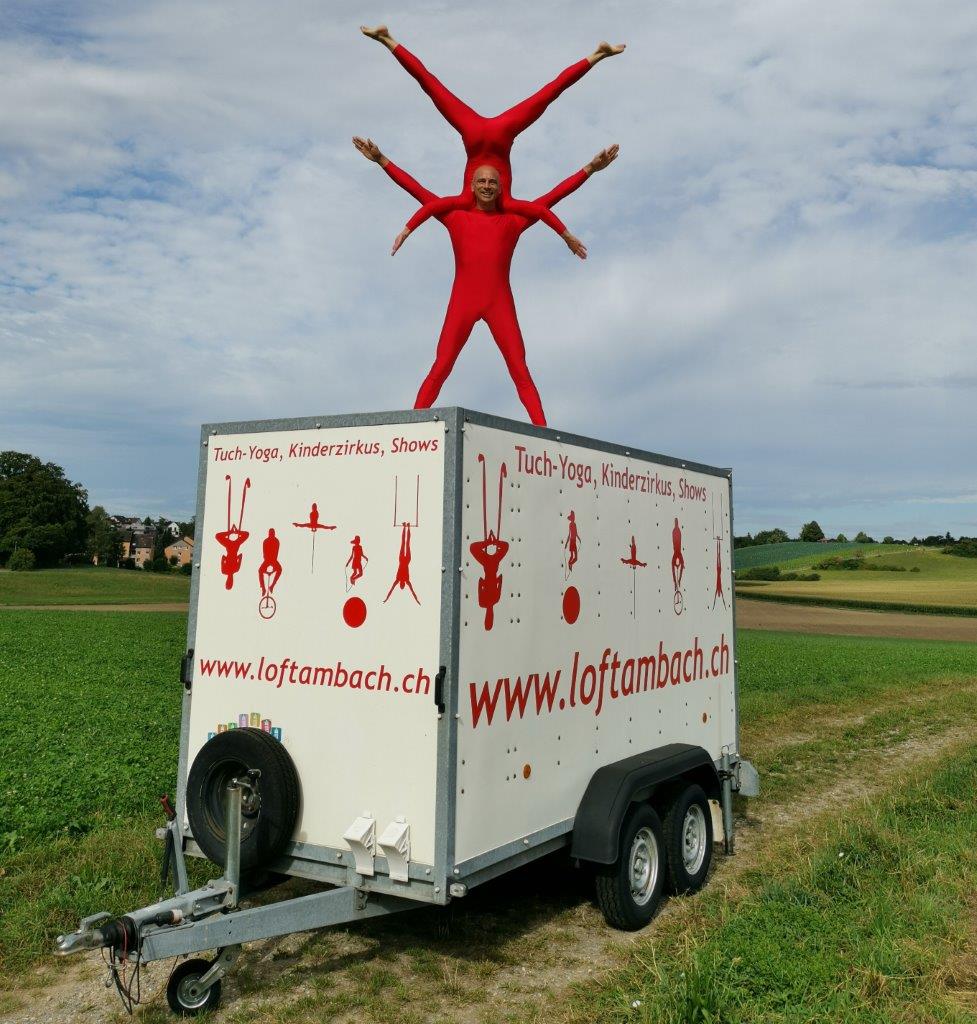 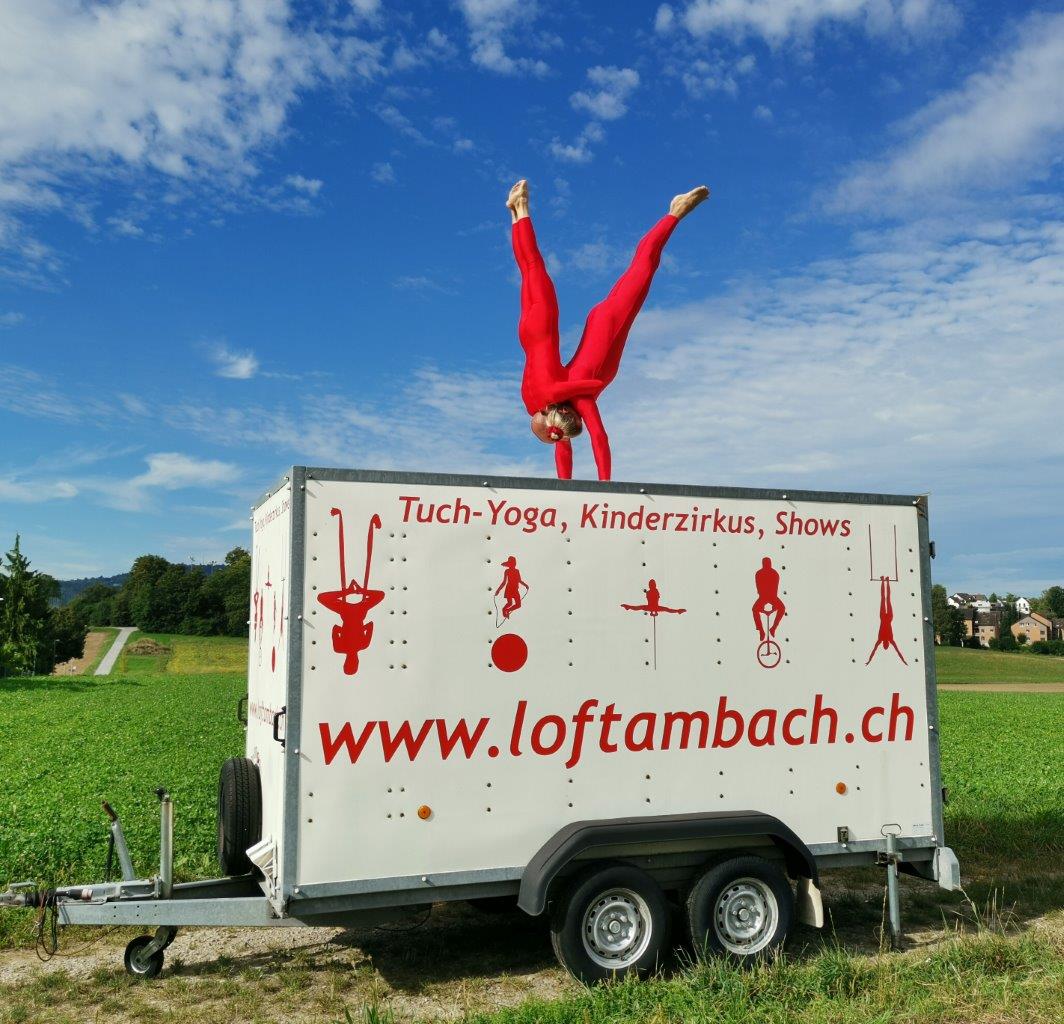 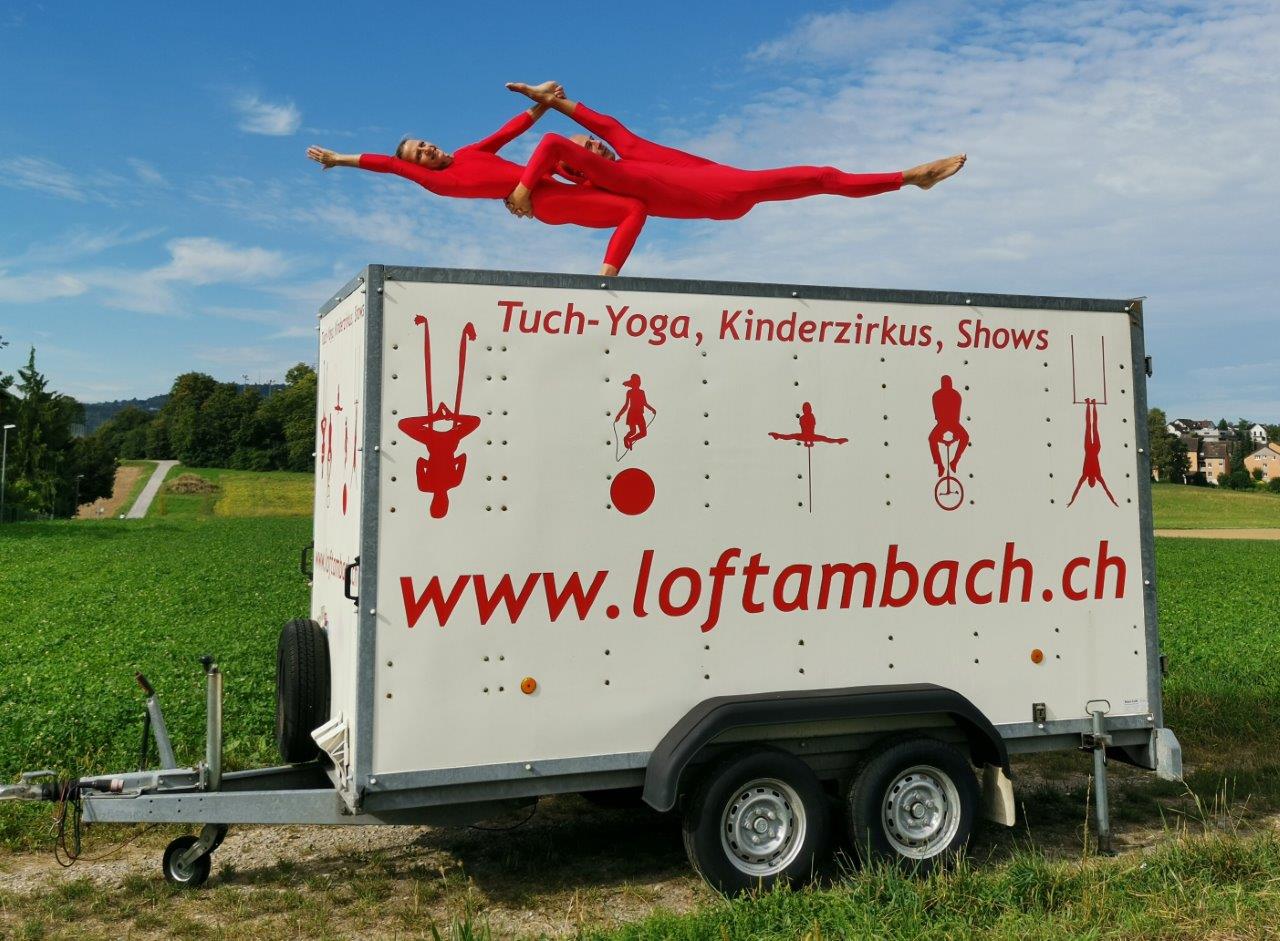